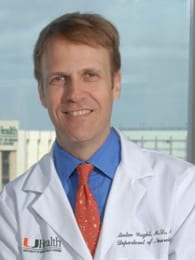 Dr. Wright, the Scientific Director for the Evelyn F. McKnight Brain Institute is a Professor of Neurology, Epidemiology and Public Health, and Neuroscience at the University of Miami. He is Chief of the Division of Cognitive Disorders in the Department of Neurology and Co-Director of the Florida Department of Elder Affairs funded University of Miami Memory Disorders Center. Dr. Wright’s research focus is on the effects of vascular risk factors and vascular damage on brain structure and function, with an emphasis on subclinical damage such as covert infarcts, white matter lesions, and brain atrophy. His research also focuses on vascular cognitive impairment with an emphasis on early cognitive changes and the interaction between aging, vascular damage, and Alzheimer’s disease. Dr. Wright has steered the scientific program at the U.M. McKnight Brain Institute since 2008, developing programs in keeping with its mission and that of the McKnight Brain Research Foundation, including development of a memory clinic registry, funding of a an animal behavior core dedicated to translational research related to cerebrovascular disease, and epidemiologic studies involving large cohorts. Current and past research funding include a grant from the National Heart, Lung, and Blood Institute to study mineral metabolism in relation to vascular disease and cognition, separate grants that examine the risk factors for cognitive disorders among blacks, latinos, and whites, and a phase 2B clinical trial as part of the University of Miami Bugher Foundation/American Heart Association Center of Excellence, to study the effects of exercise and cognitive training on recovery post-stroke. In the past, a National Scientist Development Grant from the American Heart Association, as well as an Independent Scientist Award from the National Institute of Neurological Disorders and Stroke have funded Dr. Wright’s work. He is a member of the American Heart Association, the American Academy of Neurology, and the Alzheimer’s Association.