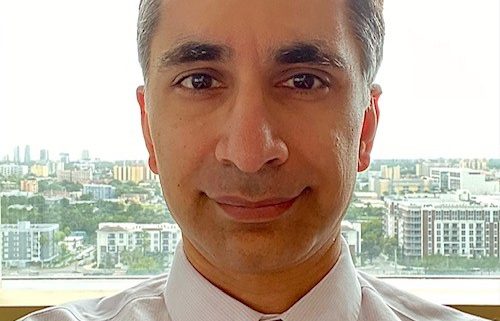 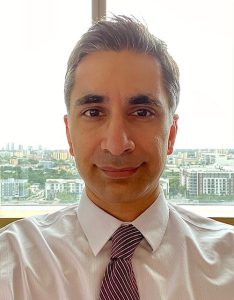 Dr. Ihtsham Haq joined the University of Miami as Chief of the Movement Disorders Division in September of 2020.  His passion for the study of the brain began at Columbia University, at which he completed degrees in Bioengineering and in Philosophy. He obtained his medical degree at SUNY Downstate and his Neurology residency training at Georgetown University. After his residency he spent three years at the University of Florida’s Movement Disorders & Neurorestoration program at the Norman Fixel Institute for Neurological Diseases performing his movement disorders fellowship training. From there he was recruited to the Wake Forest School of Medicine in North Carolina. He spent the next ten years there and reached the position of Associate Professor in Departments of Neurology and Neurosurgery. Highlights of his tenure at WFSM include bringing it into the NIH’s premier early clinical trial research consortium NeuroNext, performing pioneering brain implantations for the treatment of Tourette syndrome and obsessive-compulsive disorder, and working on multiple NIH-funded projects to phenotype the motor and nonmotor effects of basal ganglia disease.

Dr. Haq’s overall research interest has been in understanding and improving the care of patients with movement disorders, with a focus on technology and brain circuitry. He has been funded by the National Institute of Health, Parkinson’s Foundation, and Smallwood Foundation, as well as partnering with industry to bring better treatments to patients. His NIH funded research has included work on both common (Parkinson’s & Alzheimer’s disease) and rare disorders (ATP1A3 rapid onset dystonia syndrome). He has been performing Deep Brain Stimulation (DBS) surgeries since 2006 and has been part of pioneering efforts to improve targeting, increase the types of devices available to patients, and expand the number of diseases that treated by the technique. In addition to using DBS to treat Parkinson’s disease, Essential Tremor, and Dystonia, he has used it to treat patients with medication-refractory Tourette’s syndrome and Obsessive-Compulsive Disorder. Dr. Haq has also worked to advance the success of clinical trials, and shortly after being selected to the NIH Clinical Trial Methodology Course in 2017, served as the CoPI of the Wake Forest site for NeuroNext. He has published 50 articles and 3 book chapters.

Since joining the U two years ago, Dr. Haq has overseen rapid growth in the Movement Disorders division. The division now includes six fellowship-trained movement disorders specialists, two advanced care practitioners, and three resident physicians recruited to fellowship training for 2023, practicing across six clinics in South Florida. He has established new partnerships with the American Parkinson’s Disease Foundation and Parkinson’s Foundation of Southwest Florida, as well as substantially deepening the divisions longstanding relationship with the national Parkinson’s Foundation. From a trials standpoint, UM is now collaborating on more than 30 industry, NIH, and foundation-funded studies. With respect to DBS, UM implanted more than 90 leads in 2021 and were part of the pivotal trials for both Boston Scientific and Abbott’s DBS devices. He has also made it a focus to take concrete steps to ensure historically underrepresented patients are provided that opportunity to participate in research at UM, including pipeline programs, advocacy, and disparity research.