The Evelyn F. McKnight Brain Institute at University of Miami was established in 2007 by the 2002 $5M donation from the McKnight Brain Research Foundation and a $5M match, $3.5M from the Schoninger Foundation and $1.5M from other UM donors. In 2008, two important steps occurred to realize the purpose of the McKnight Brain Research Foundation: 1) the appointment of Ralph L. Sacco,MD, MS as Executive Director, and 2) the appointment of Clinton B. Wright, MD as Scientific Director, of the Evelyn F. McKnight Brain Institute. As Scientific Director, Dr. Wright developed a team of scientists, researchers, and clinicians to explore not only normal memory changes that happen with age, but the cognitive defects produced by various brain-related diseases. Dr. Wright left in 2016 and in September of 2017, Tatjana Rundek,MD, Ph.D. was appointed Scientific Director. In addition she was awarded the Evelyn F. McKnight Chair for Learning and Memory in Aging.  The Schoninger gift allowed the School of Medicine to name the Alexandria and Bernard Schoninger Neuropsychology Program and Bonnie Levin, Ph.D, Professor in Neurology and Chief of the Neuropsychology Division to the Alexandria and Bernard Schoninger Professorship. In 2018 Xiaoyan Sun, MD, Associate Professor of Neurology joined University of Miami and is serving as Education Director.

“We are delighted to continue our long association with the University of Miami Miller School of Medicine as together we lead the way in medical research focused on the brain,” said J. Lee Dockery, a trustee of the McKnight Brain Research Foundation. “The trustees of the foundation are committed to fulfilling the wishes of Mrs. McKnight by promoting research into the fundamental mechanisms that underlie the neurobiology of memory, as it relates to age-related memory loss and the toll it takes on our aging population.”

By the year 2030 it is estimated that nearly 25 percent of Americans will be 65 or older, with millions suffering some form of memory loss.

Founded in 1999, the McKnight Brain Research Foundation supports research toward the understanding of memory and the specific influences of the natural aging process. Evelyn McKnight, who was a nurse, and her husband, William, were interested in the effects of aging on memory. William McKnight was chairman of the board of the 3M Corp. for 59 years before his death in 1979. Evelyn McKnight continued to support his interest in brain research and memory loss until her death in 1999. Their commitment continues through the McKnight Brain Research Foundation. In addition to the Evelyn F. McKnight Brain Institute at the University of Miami, the Foundation also supports: 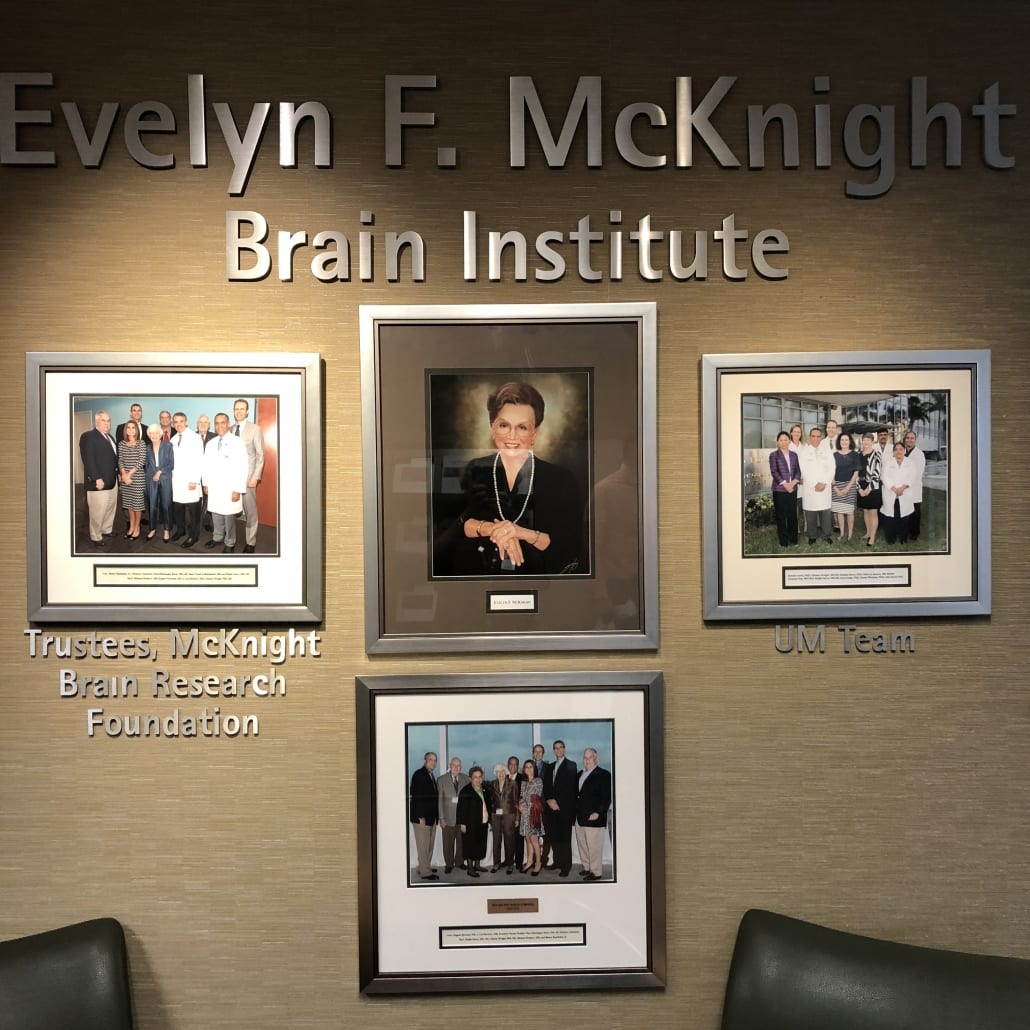