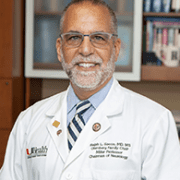 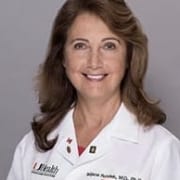 Dr. Tatjana Rundek is a Professor of Neurology, Epidemiology and Public Health with tenure, Vice Chair of Clinical Research, and Director of the Clinical Translational Research Division in the Department of Neurology of the University of Miami, Miller School of Medicine. She holds a secondary faculty appointment at the Department of Neurology at Columbia University in New York. Dr. Rundek is a stroke neurologist, clinical researcher and principal investigator of several NIH/NINDS funded R01 grants on genetic determinants of carotid atherosclerosis and stroke. Dr. Rundek is a recipient of a NINDS K24 Midcareer development award. She participates in large stroke genetic consortia including the NINDS Stroke Genetic Network and International Stroke Genetic Consortium. Dr. Rundek was a Fulbright Scholar and the recipient of the research awards from the Hazel K. Goddess and the Dr. Gilbert Baum Funds. Dr. Rundek serves on the editorial boards of several scientific journals including Stroke, Neurology, Journal of Ultrasound in Medicine and Cerebrovascular Diseases. She has published over 210 scientific publications, editorials, reviews, and book chapters. She is a fellow of the American Neurological Association, a member of the American Heart Association and American Academy of Neurology. She is past President of the Neurosonology Communities of Practice of the American Institute in Ultrasound in Medicine, the largest professional medical ultrasound organization in the U.S. Dr. Rundek serves on the Intersocietal Accreditation Commission (IAC) Vascular Testing Board of Directors, a national organization that accredits clinical echocardiography, nuclear/PET, MRI, CT and Dental laboratories and carotid stenting programs.