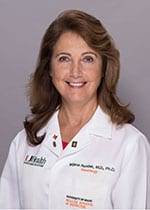 Tatjana Rundek, M.D., Ph.D., FAAN, professor of neurology and public health sciences and executive vice chair for research and faculty affairs in the Department of Neurology, has been named scientific director of the Evelyn F. McKnight Brain Institute and Evelyn F. McKnight Chair for Learning and Memory in Aging at the University of Miami Miller School of Medicine. She has served as the interim scientific director since October 2016.

The Evelyn F. McKnight Brain Institute at the University of Miami was established in 2007 with a donation from the McKnight Brain Research Foundation and a match from the Schoninger Foundation and other UM donors. Its mission is to discover and explore normal memory changes that happen with age, investigate the causes of age-related disorders of brain function and memory, and develop ways to prevent them.

Born and raised in Zagreb, Croatia, Rundek received her medical degree and neurology training at the University of Zagreb, a Ph.D. in neuroscience in Germany, and completed a research fellowship at Columbia University.

Rundek is a neurologist, clinical researcher, epidemiologist and principal investigator of several R01 grants and foundation awards funded by the National Institutes of Health/National Institute of Neurological Disorders and Stroke (NIH/NINDS). She received a NINDS K24 training grant and research awards from the Hazel K. Goddess Fund for Stroke Research in Women and the Dr. Gilbert Baum Fund in Clinical Ultrasound for best clinical application of ultrasound in investigations of brain hemodynamics.

Rundek was the first Fulbright Scholar at the Neurological Institute at Columbia University. As the International Fulbright Scholar Leader in 1996-97, Rundek gave a presentation on the importance of the international research exchange program at the 1997 Annual UN Assembly in New York. Rundek is a dedicated scientist with a strong commitment to service to the scientific community. She serves on review study sections at the NIH, the American Heart Association, the American Academy of Neurology and on the editorial boards of many scientific journals. She has published more than 400 scientific publications, editorials, reviews and book chapters. Rundek’s professional and scientific interests include genetic, epigenetic and environmental contributions to cerebral small vessel disease, stroke and cognitive decline with a specific focus on health disparities in women and minority populations. Her current investigations involve the vascular mechanisms of successful aging, mild cognitive impairment and dementia, using magnetic resonance imaging and transcranial Doppler challenge testing in collaborations with the Einstein Aging Study in the Bronx, the Northern Manhattan Study, and with other McKnight Brain Institutes at the University of Florida, University of Arizona and University of Alabama at Birmingham.

Rundek is dedicated to brain health education to communities, and to training and mentoring new generations of cognitive neurologists and other professionals needed to overcome challenges of preserving and restoring brain health of the rapidly growing population of older adults in the U.S.

“Dr. Rundek’s background and training, both as a clinician and a research scientist, make her uniquely qualified to advance the research initiatives in cognitive aging leading to the understanding of and alleviation of age-related memory loss, not only at the University of Miami, but throughout the universal scientific community,” said J. Lee Dockery, M.D., chair of the Board of Trustees for the McKnight Brain Research Foundation.