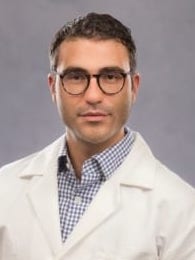 Dr. Christian Agudelo grew up in Miami, Florida. He received his bachelor in science in engineering from Duke University, where he studied biomedical engineering. He received his medical degree from the University of Pittsburgh School of Medicine. His research in medical school included the study of psychophysiology and dysautonomia in Parkinson’s Disease. During a post-doctoral research fellowship at the University of Pittsburgh, he studied late-life cognitive and mood disorders using multimodal neuroimaging (functional MRI, structural MRI, and PET). He completed his residency in neurology and fellowship in sleep medicine at the University of Miami Miller School of Medicine / Jackson Memorial Hospital. As the Evelyn F. McKnight Neurocognitive Scholar at the University of Miami, he is continuing his training in neurocognitive neurology to study the effects of sleep on age-related memory loss and cognitive decline. Dr. Agudelo is a member of professional and scientific organizations dedicated to clinical practice, research, and service to the scientific and professional neurology community, including the American Academy of Neurology and the American Academy of Sleep Medicine.

Dr. Agudelo is interested in the ways sleep influences memory and cognitive decline. His research aims to identify sleep-specific mechanisms responsible for cognitive decline and to develop sleep-related biomarkers of cognitive aging. Such biomarkers could be used to diagnose pre-symptomatic cognitive disease, to track disease progression, as targets for intervention, and to assess the efficacy of future therapies. As sleep can be modified pharmacologically, surgically, and behaviorally, Dr. Agudelo believes that sleep could one day be engineered to mitigate cognitive aging and optimize cognitive and brain health.